Conservative-led states challenging the Biden administration’s Covid-19 vaccine mandate for companies that do business with the U.S. government likely will struggle to gain traction in court due to the history of attaching strings to federal contracts.

President ‘s executive order gives employees of federal contractors until Jan. 4 to get the vaccine, unless they have a valid argument for an accommodation. The mandate, which applies to roughly a quarter of the U.S. workforce and affects companies such as , , ‘s Google, and , has spurred a series of lawsuits seeking to block implementation.

While the plaintiffs are many, their odds of success are worse than for challenges against other federal vaccine mandates—and even Arizona’s top lawyer acknowledged his state’s suit was a “long shot.” The reason, employment attorneys and academics say, is that federal contractors are likely bound by their agreement with the government.

“You’re talking about the federal government making rules about its own contracts,” said Karla Grossenbacher, labor and employment partner at Seyfarth Shaw in Washington, D.C. “Are these lawsuits being filed because they actually think they have a good chance or is it good public relations?”

Several individual states and state coalitions, including Arizona, Florida, Texas, Oklahoma, Georgia, and Kentucky, have sued in federal court, arguing the administration lacks the authority to require vaccinations and that such mandates violate the U.S. Constitution.

The various state attorneys general offices didn’t respond to requests for comment, but Florida’s lawsuit, filed Oct. 28, offered an argument that’s common among the challenges, calling the requirement for government contractors a “radical intrusion on the personal autonomy of American workers.”

The uncharted nature of arguments against government efforts to make vaccination compulsory, however, leave companies in an uncertain position, particularly if courts around the country rule differently.

“The complaints have some potentially viable arguments,” said Marc Antonetti, employment partner with Baker & Hostetler LLP in Washington, D.C. “The federal government is trying to do a lot in a short amount of time. When you do that, you could find there are problems around the edges of implementation.”

He acknowledged, though, that the federal government’s arguments in support of the mandate will rest on strong footing. “If you want to do business with the United States, you have to comply with their rules,” he said.

President Biden speaks at the White House on Nov. 6.

The challenges come as some workers have asked for exemptions en masse, including 11,000 at The , one of the top federal contractors.

The mandate for businesses providing services for the federal government is part of a suite of Biden administration actions designed to increase vaccination rates. That includes an emergency regulation from the U.S. Occupational Safety and Health Administration that covers private-sector companies with 100 employees or more, a shot requirement for health-care companies paid by Medicare and Medicare, and one for federal workers.

Numerous challenges to those mandates are pending in appellate courts, and the U.S. Court of Appeals for the Fifth Circuit has temporarily halted enforcement of the OSHA regulation.

The contractor order “is going to be more defensible” than the OSHA regulation, said Stewart Schwab, employment law professor at Cornell University. He said contractors would face greater uncertainty if their state bans vaccine mandates, setting up a clash with Biden’s order.

“If you have states coming back at that and passing laws to say companies cannot mandate the vaccine, it plays out differently than OSHA, because no company has to take a government contract,” Schwab said.

Rob Duston, labor and employment partner at Saul Ewing Arnstein & Lehr, made a similar point. “There’s too long a history of broad discretion to impose requirements by a contract,” he said. “The states are saying that they want the federal money to go to the businesses but they don’t want to comply with the rule.”

Duston noted federal contractors are required to follow stricter non-discrimination guidelines than other private-sector companies, which has been the case for 30 years. The best arguments states can make will focus on why the government wants to enforce the order now, rather than earlier in the pandemic, he added.

VIDEO: President Biden’s vaccine mandate rule for companies, the likely legal challenges and what to expect next.

Schwab said the U.S. Supreme Court has dealt with allegations of federal overreach in an Affordable Care Act case that could prove analogous. In that dispute, the question was whether a spending requirement of the federal health-care law was too onerous.

The vaccine issue is similar, but not exactly the same fact pattern, he said.

“It might be a loose analogy,” he said. “The contractors could say these states are telling us the opposite of the federal mandate, what can we do? That’s a big federalism issue.”

He added, “The states have to remember that if Congress is exercising a valid power, that power is supreme over the states.” 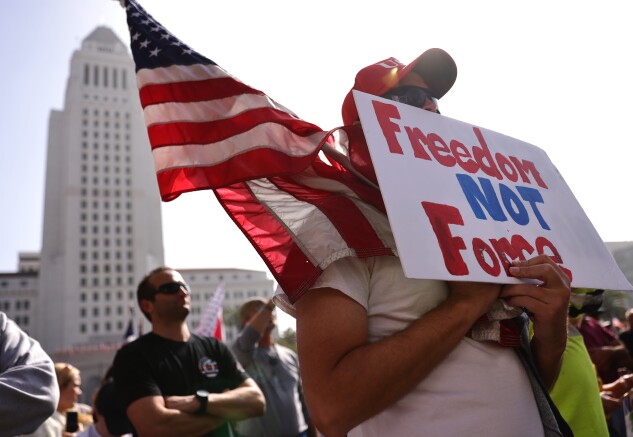 Protestors gather in Los Angeles on Nov. 8 to oppose a local vaccination mandate for city employees and contractors.

Seyfarth Shaw’s Grossenbacher noted that Montana is the lone state prohibiting a vaccine mandate explicitly, after lawmakers there passed a non-discrimination rule for vaccine status. She said it remains to be seen whether the states will argue that federal mandates supersede such orders.

The legal definition under federal law of what constitutes a grave danger is detailed and clear, and should include a public health crisis, said Jim Brudney, law professor at Fordham University. He said the executive branch can’t issue an order that flouts a law that Congress passed, but that doesn’t appear to be the case with vaccine mandates.

“There may be an argument that the federal government exceeded its powers, but that’s a tough argument,” he said.

With the compliance deadline looming for contractors, conflicting rulings could create a “hodgepodge that makes its way to the Supreme Court,” said Baker & Hostetler’s Antonetti.

He noted how the contractor deadline was delayed from early December to January, to accord with the OSHA rule, and that the temporary halt to the latter adds to employers’ uncertainty.

“These delays might raise questions about how it was all implemented,” Antonetti added. “There are competing concerns and the court might weigh some of these practical questions.”

But, more than anything, confusion between state and federal authority underscores the dilemma employers are confronting, he said.

“A lot of workers don’t want to be vaccinated and a lot of other workers feel strongly they should be,” he said. “Clarity is the most important thing, and given to us soon by the courts.” 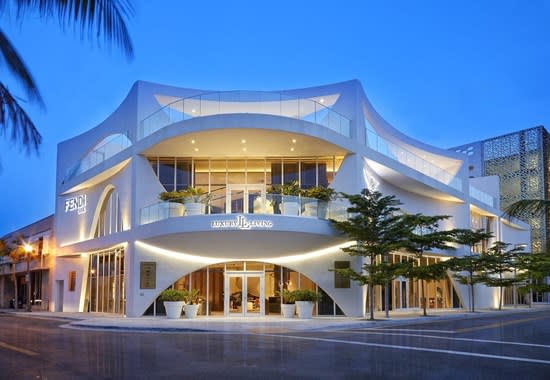