The river garden at Quarters One was edged with irregularly hewn flat limestone slabs and planted with irises, elephant ears plants and annual flowers. It contained three water falls. 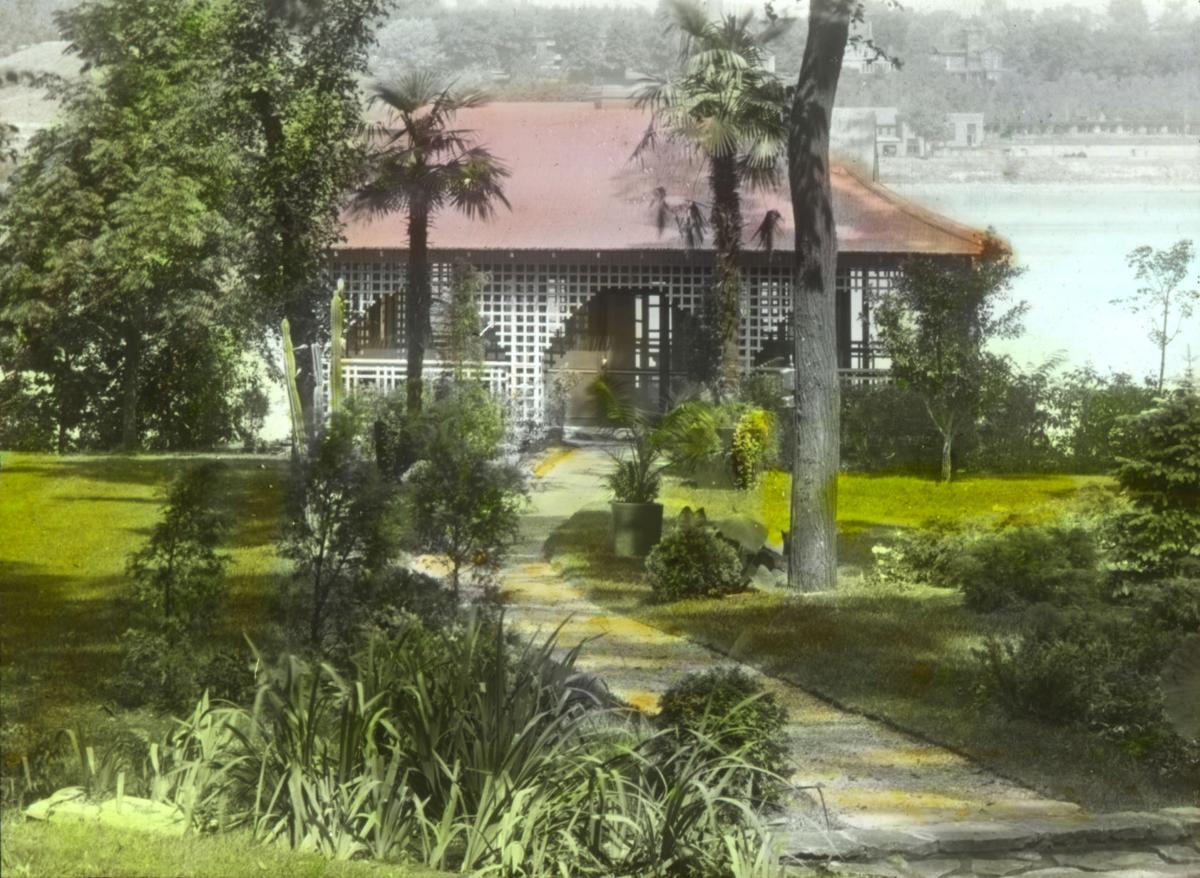 With the addition of a Japanese-style flared roof and lattice panels, this small building — originally built as a summer house nearly on the river’s edge — took on a Japanese flair. This photo was taken in 1919 and later colorized. 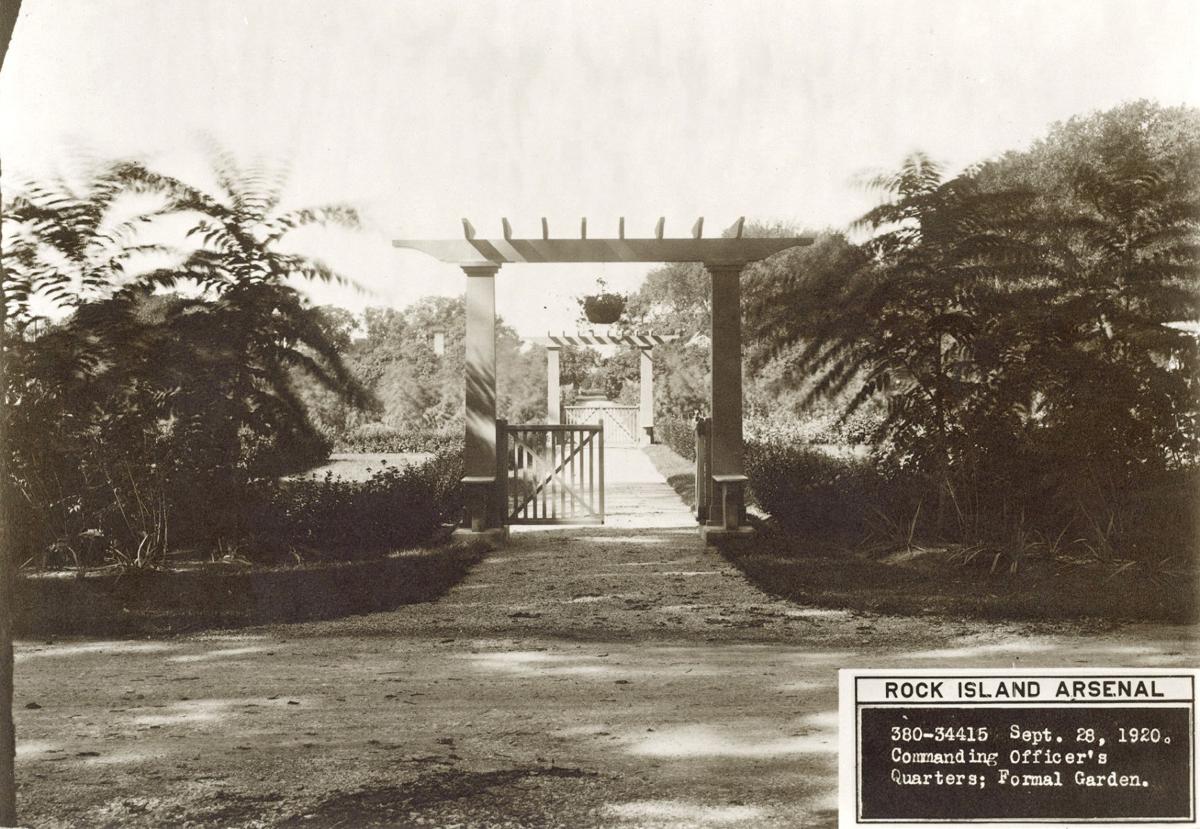 The formal gardens at Quarters One included pergolas and gravel paths. 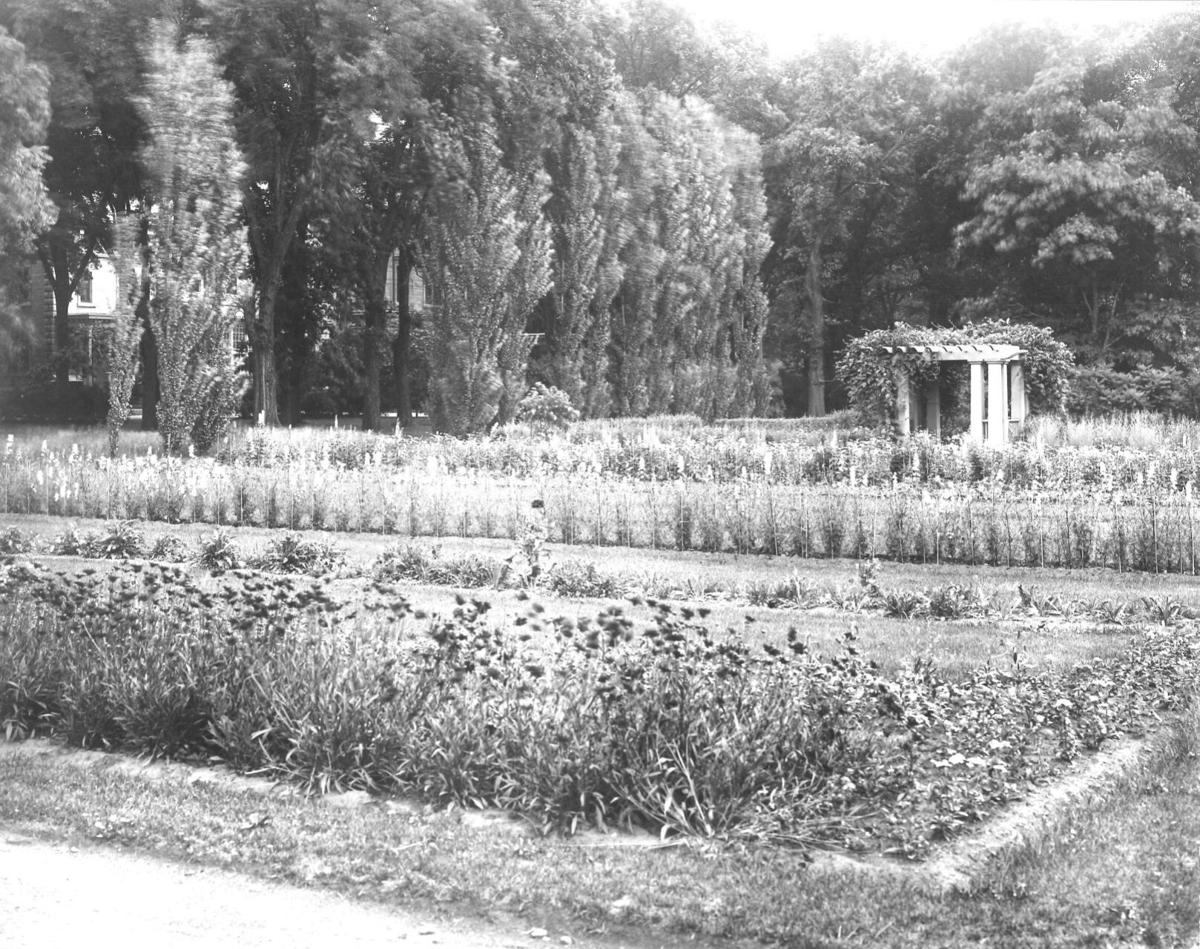 Formal gardens at Quarters One included cutting gardens, or those grown specifically so that the flowers could be cut to provide bouquets and other arrangements for inside the residence. 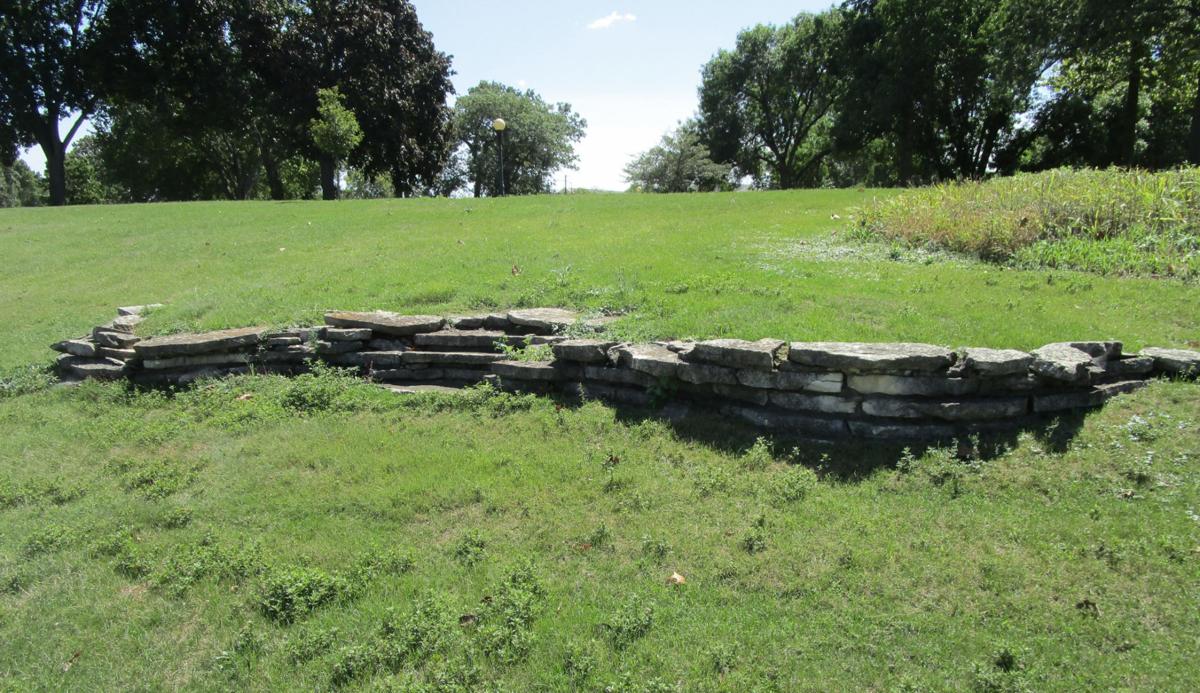 This limestone wall remnant is about all that remains of the once three-tiered river garden at Quarters One. It is located northeast of the mansion. 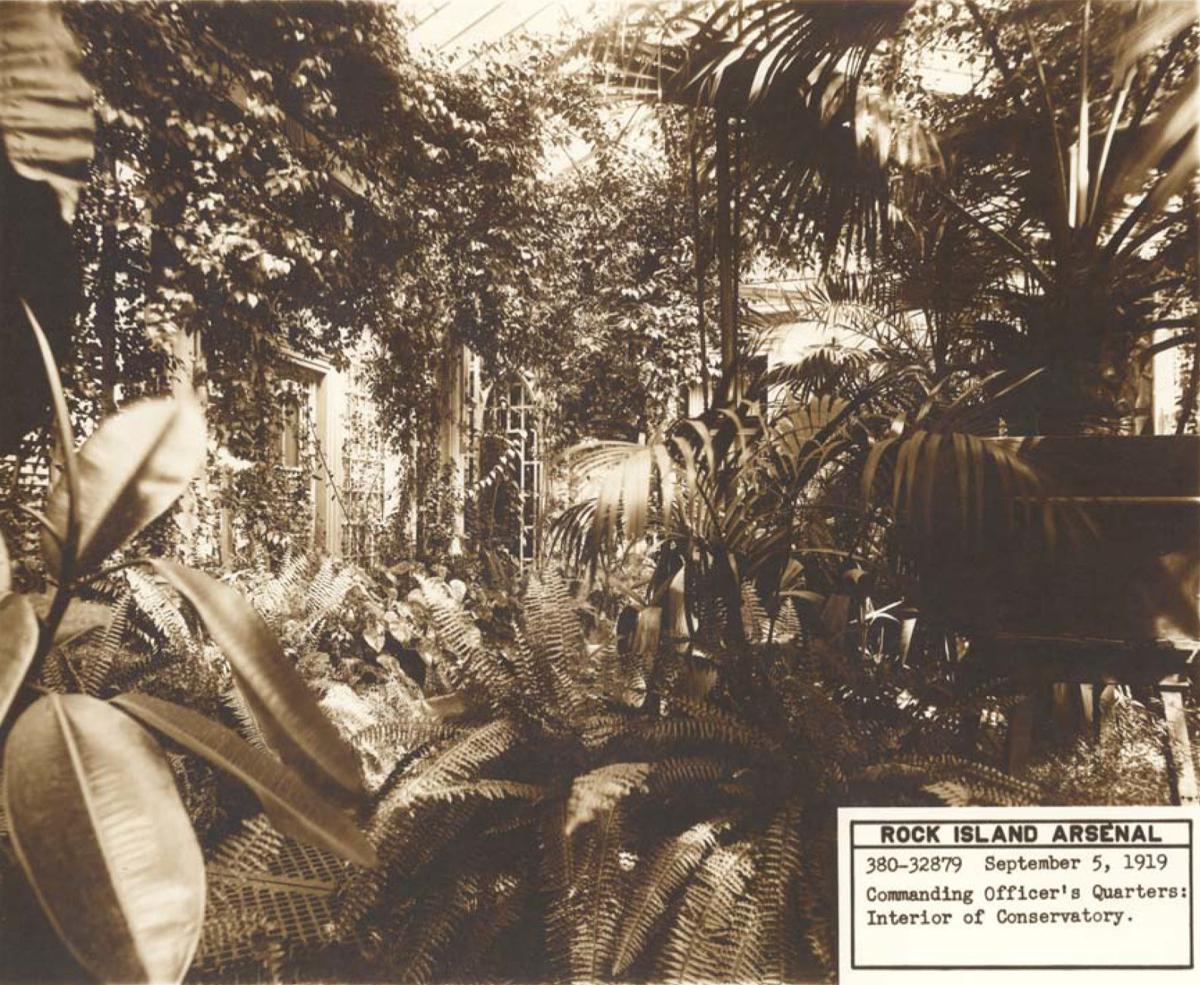 The interior of the conservatory attached to Quarters One was filled with thriving tropical plants. 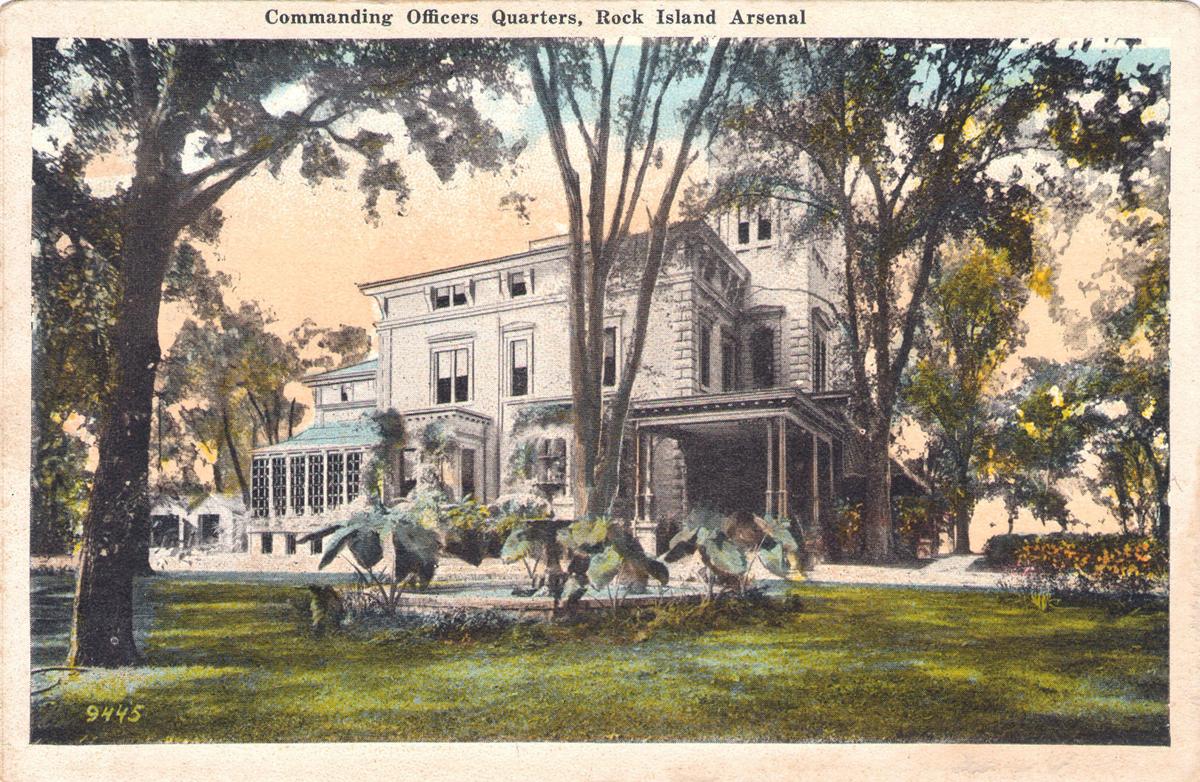 This colorized postcard of Quarters One shows a metal fountain surrounded by elephant ears plants. The room with many windows on the left is the conservatory that was removed in 1972. 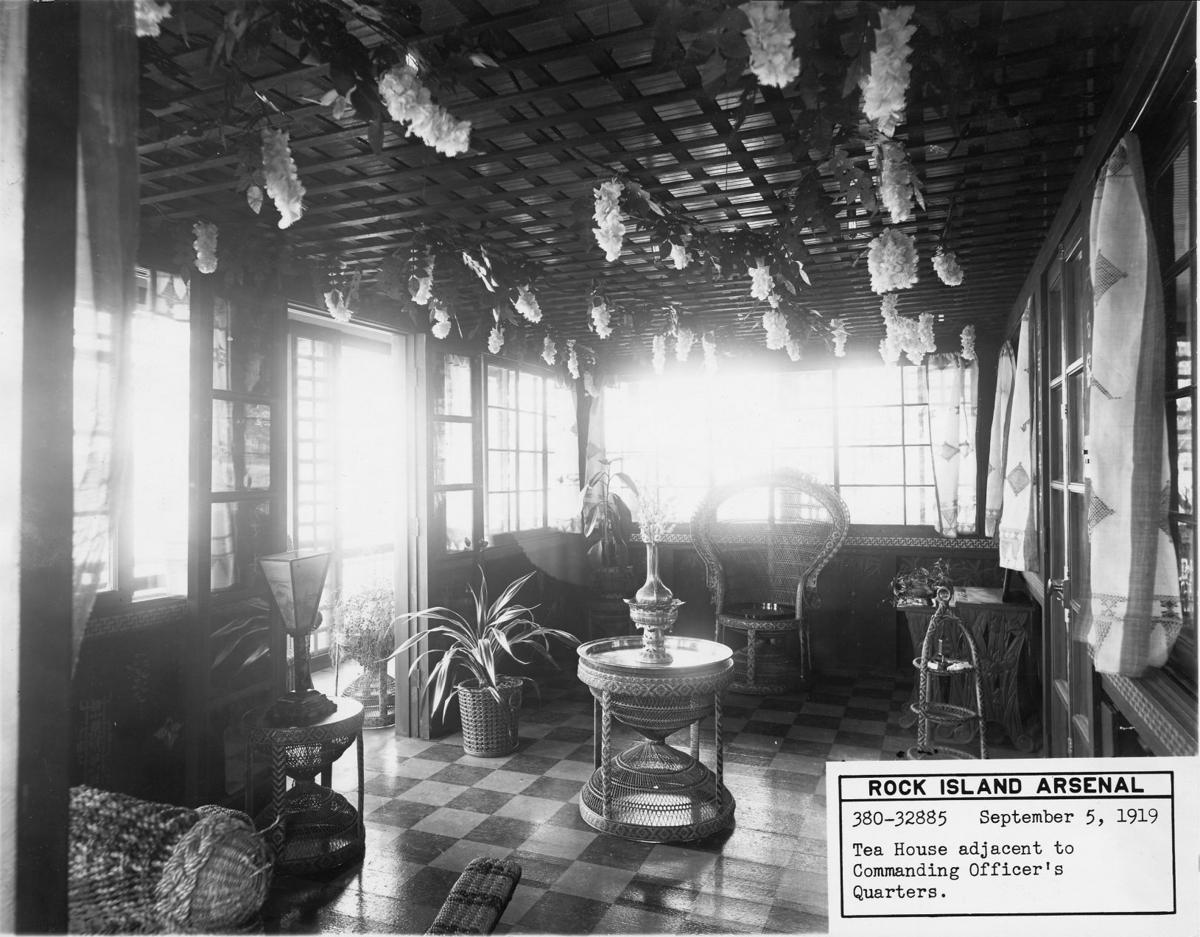 This photograph shows the interior of the tea house as it was on Sept. 5, 1919, decorated for pre-Labor Day events. The wicker furniture was the type shown in a number of catalogs of Asian imported goods during the early 1900s.

Anyone walking the grounds of the huge Quarters One residence on Arsenal Island might notice a small limestone wall in the lawn northeast of what was once the arsenal commander’s home.

But you would be right — the wall was once part of a large “river garden” with trees, ponds and streams built during 1919 under the direction of Adelita Jordan, wife of former commander H.B. Jordan, and at least once referred to as a Japanese garden because at one time it included a tea house perched near the river’s edge.

It’s not known exactly when the garden vanished.

The river garden and other now-vanished landscape features of Arsenal Island — formal flower gardens, cutting gardens, greenhouses, a conservatory filled with tropical plants and World War II Victory gardens — are being brought to light by Beth Cody, a gardening enthusiast and small business owner from  Kalona, Iowa, who has published a 66-page booklet titled “Quarters One Gardens.” The booklet was an outgrowth of information she gathered while researching Midwest Japanese gardens for the Muscatine Art Center, as reported in the Oct. 31 Quad-City Times.

Cody found virtually no written documentation about gardens on the island, but was able to piece together a likely story based on photographs from the U.S. Army Sustainment Command, Davenport Library, Putnam Museum and Augustana College, and newspaper articles about social events taking place in the gardens. She also dug up information about a Japanese landscape architect named T.R. Otsuka, whose work depicted in a nursery catalog of the time looks very much like the river garden on Arsenal Island. This led Cody to conclude that he likely was the river garden’s architect. 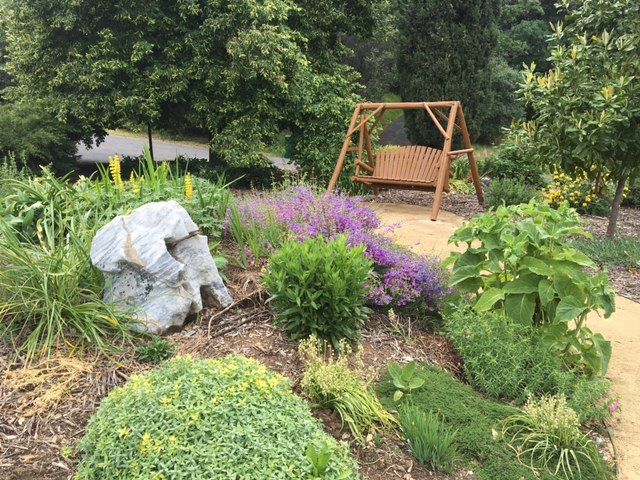